When October rolls around, I recall the old mariner’s poem that attempts to describe the hurricane season like this:

June too soon.
July stand by.
August look out you must.
September remember.
October all over.

The poem was published in “Weather Lore” by R. Inwards in 1898. That description was probably thought to be reasonably accurate over 100 years ago. A publication called “The Deadliest Atlantic Tropical Cyclones, 1492-1996″ by Ed Rappaport and Jose Fernandez-Partagas (http://www.nhc.noaa.gov/pastdeadly.shtml) states that the last line of the poem may be more ambiguous than helpful. In some Octobers, “all over” seems to describe the spatial distribution rather than a certain cessation of activity.

The graphic below shows the formation points of 277 tropical storms during the month of October from 1851 to 2007. 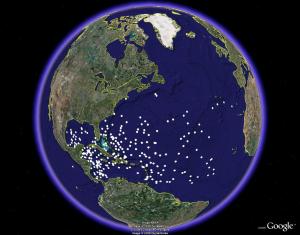 The graphic below shows the formation points of 146 hurricanes during the month of October from 1851 to 2007.

HURRTRAK display of Hurricane Formation Points in October from 1851-2007

These two graphics make a pretty good case for the fact that the hurricane season is usually “not over” by October.